Originally published three years ago, I want to share it again…

In a recent lecture I attended at the University of Wisconsin – River Falls, Professor Christopher Simer stated, “Crisis? What crisis?” as he opened a discussion on the nuclear stalemate between the United States and North Korea. I tend to agree with the good professor. Regardless of personalities involved, I consider the purposeful use of nuclear weapons remote amid these days of continued brinkmanship that characterized the Cold War years that I grew up in. Of course, as Richard Bach told us in Illusions, everything I write may be wrong.

Nuclear weapons have been purposefully employed just once – twice if you consider two bombs were dropped three days apart on August 6 and 9, 1945. I want to believe that humanity has learned much since the United States ‘cried havoc and let loose the dogs of war!’ I will have faith and pray that it has. My granddaughters asked if I had pictures of their great-grandfather ‘during the war.’  As I searched for pictures, I found a document he wrote in 1995, an autobiography of sorts, two decades before he passed away on June 3, 2015.  I am proud to include it as a chapter in Tree Rings. My father built a grandfather clock from a kit in 1974.  It quit working correctly many years ago, about the same time he did.  Although he passed quietly in his sleep on June 3, 2015, the clock continues to function, but the chimes have long since gone silent and it no longer ‘ticks’ as the pendulum continues its methodical swing, but quietly.  No clocksman had been able to fix it in years past, and today there are no clocksmen to try.  They disappear like tradesmen.  Plumbers and electricians will be the millionaires of the future.  Clocksmen won’t because there are not enough clocks to fix.  Time has been digitally disrupted.

Still, the grandfather clock stands silent sentinel in the entryway and watches me as I sit on the wooden bench to don my winter boots on these cold mornings to walk my dogs.  A part of my father remains in the clock.  He smiles a bittersweet smile knowing that my thumbs, particularly the one on my right hand ache with arthritis as I struggle to tie the bootlaces.

A regulator clock hangs on the wall in the living room.  While I cannot verify its age, it does look like a regulator you might see in the telegraph office, the railroad station or the sheriff’s office in an old Western film.  It ‘ticks’ with confidence and it chimes as long as it’s wound.  There is comfort in its regularity.

My father built me in 1949.  I quit working correctly with my first hip replacement early in the millennium.  I opted for a second artificial hip in 2014 as much to ease the pain as to complement the first.  Now I have two artificial hips.  The second one works better than the first.  Together – like the grandfather clock and the regulator – they work well.

I still get to bed early and I’m early to rise, I am healthy, not wealthy but wise enough to know how little I do know.  I continue to function, to bike, hike, read, write, walk, pray, swim and kayak, but I don’t sing as much as I used to.  I can’t hit the high notes.  No one misses it but me. Remembering childhood friends and experiences is a magical exercise regardless of how many years and decades have passed.  Remember your friends, near and far, new and old.  Time to share coffee and reminisce. 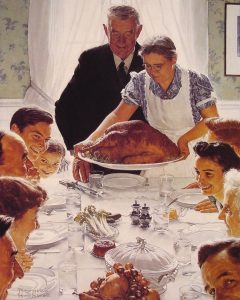 I sincerely hope Thanksgiving brings fond memories to you as it does to me.  And if we are lucky, the Thanksgiving we share this day will last as a good memory for all with whom we share it.