As the 2014 Winter Olympics commence tomorrow morning, we are announcing February’s “E.S. Kraay Online” give away, a copy of The Hamsa. 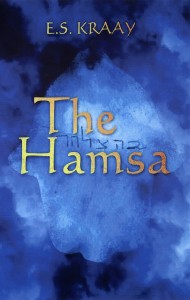 A Holocaust story, The Hamsa is based on the life of Polish Olympic skier Bronisław Czech who competed in three Winter Olympic Games:  1928 in St. Moritz; 1932 in Lake Placid; and 1936 in Germany where he led his team carrying the Polish flag into the stadium at the opening ceremonies in Garmisch-Partenkirchen.

February’s contest will run coincident with the Winter Olympics in Sochi, Russia.  The contest begins today and will end on Friday, February 21st at midnight.  We will announce one domestic U.S. winner and one international winner the next day.  If you win, you will have the choice to receive The Hamsa as either and autographed, physical book, or as a Kindle download.

A final note … January’s Olympian winner accumulated 31 points by repeated entries.  Remember: you can return to the contest once a day and take additional action to earn more points.  If you already subscribe to “E.S. Kraay Online,” we will honor your subscription; just enter the year in which you subscribed.  Why make multiple entries?

In February, if the winner earns 50 or more points, he or she will also win a genuine U.S. military issue GI Hamsa.