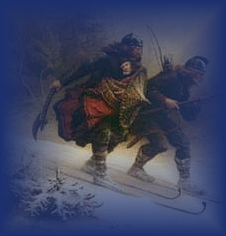 With the Winter Olympic Games now in full swing in Sochi, Russia, you might be interested in the early games.

The ancient Greeks established the Olympic Games in 776 BC.  Those first games consisted of a single race, the Stade, about 200 meters.  My first novel, The Olympian: A Tale of Ancient Hellas includes a detailed description of the 75th Olympic Games held in 480 BC, the same year the 300 Spartans made their memorable stand at Thermopylae.  Alistair McKenzie produced an audio edition of the book — approximately 8 hours — which became available last month.  The ancient games were last held around 400 AD.  The modern games were re-established in Athens, Greece in 1896.

The first Winter Olympics were held in 1924 in Chamonix, France.  The games in St. Moritz in 1928, Lake Placid in 1932 and Garmisch-Partenkirchen in 1936 are integral to my second novel, The Hamsa.  Through the exploits of the protagonist Bronislaw Czech, a Polish Olympic skier and ski jumper, the reader learns great detail about these early Winter Olympics.  When Germany invaded Poland in 1939, Czech’s mountain skills became invaluable to the Polish Underground, but in 1940, he was captured and became the 349th person incarcerated in the Auschwitz death camp where he died in 1944.

Throughout the course of these 2014 Winter Olympic Games, we are running a contest.  The winner will receive a copy of The Hamsa as a physical book or

Ebook, winner’s choice.  If the winner accumulates more than 50 points (by entering multiple times), he or she will also win a U.S. Military Issue Hamsa.  We invite everyone to compete at

By the way, The Hamsa and all of my books are commercial-free.