I love dogs.  I have three:  Caesar, a seven-year old American bulldog; Hans, an 11-year old mutt akin to a coyote; and Cooper, an aging 12-year old Icelandic sheepdog.  Big, medium, small … I love them all.

In three of my five books, dogs play an important role.  In The Hamsa, Bronisław Czech meets the dog Raphael in Rome, and the dog is ‘with him’ for the remainder of the story.  In Tobit and the Hoodoo Man, the dog Caesar enters the story with Father Gabriel midway through the narrative.  In The Sixth Day, Scooter makes his important appearance on … ‘the sixth day.’  Each dog plays an important role and is graced with a special ‘spirituality.’

In truth, Raphael and Caesar were both fashioned after my dog Caesar.  Raphael even 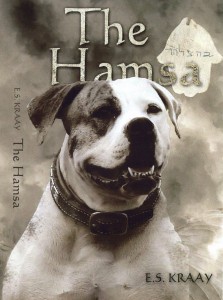 graces the cover of the Kindle edition of The Hamsa.  When I wrote Scooter into The Sixth Day, I envisioned Sparky from the 1996 film Michael. 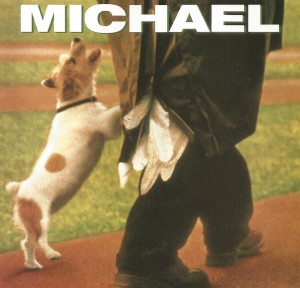 This morning, I read an interview with best-selling author Dean Koontz in the Spring 2014 issue of “Parabola” magazine.  Mr. Koontz includes dogs in his stories, and they play important roles.  (At least I can claim one thing in common with Mr. Koontz!)  His character Einstein, the genetically altered golden retriever in his 1987 thriller Watchers immediately comes to mind.

Here is how Mr. Koontz responded when “Parabola” asked him what happens to dogs when they die …

“I agree with Robert Louis Stevenson who said, ‘You think dogs will not be in heaven?  I tell you, they will be there long before any of us.’  Our first golden retriever, Trixie, dramatically changed me and my wife, Gerda, and had such a positive impact on our lives that I have written – in A Big Little Life – that I am convinced Trixie was a theophony, the presence of God in our lives.  When I encounter someone who sees nothing miraculous about dogs, I at once suspect they see nothing miraculous about life and therefore live in the absence of hope.”

I could not agree more with Mr. Koontz.  For those of you who might come to my home and be concerned with dog hair and slobber …. Get over it!

4 thoughts on “Dogs in Books”