With the possible exceptions of The Olympian, a villain creeps naturally into each of my manuscripts.

German Untersturmführer Feldman, a Nazi plays an important role in The Hamsa.  While it may be difficult to determine who the good guy is and who is the bad guy, there are a number of villainous candidates to choose from in DWI: Dying While Intoxicated.  There is clear conflict in The Sixth Day, but it would be difficult to label Stashu, the white boxer or even Ernie Soldato, the gang leader as a villain.  Here’s a teaser:  In HopLite Entertainment’s screenplay for “Third Man” written by Alistair McKenzie and Jasmine Fontes there is a clear ‘villain,’ but I won’t let on which character can claim that title.

Of all my villains, I am most ‘fond’ of Wolfenbüttel, the overseer of the Nineveh Plantation in Tobit and the Hoodoo Man.  Wolfenbüttel is a bad, bad man, and like Black Bart in “Christmas Story,”  ‘he gets his’ in the end.  Which leads me to Gaspar …

Early today, I received an email from Father Alexei Michalenko, former Chaplain at the Georgetown University Law Center.  I was pleased with the opening four words

While I am apt to share more from Fra Michalenko’s commentary, I want to focus this post on villains.  “I sensed so many connections in what I read,” Fra Michalenko writes, “Elements of characters from Harry Potter.  Alexander and Flavian reminded me of Saverus Snape and Draco Malfoy.”  For starters, I may be the sole person on planet Earth who has not read a Harry Potter book nor watched one of the films.  Consequently, I was required to research the two characters to whom he referred.

What I share here is not a spoiler.  For those who have not read Gaspar, Another Tale of the Christ, Alexander is an arrogant, overly confident teacher at the Greek Ptolemaeum where Gaspar also instructs in 20 AD or so, and Flavian is a helper there and serves as Alexander’s aide de camp.  Both characters surface again 10 to 15 years later in the most unlikely of circumstances.  I will leave it at that. 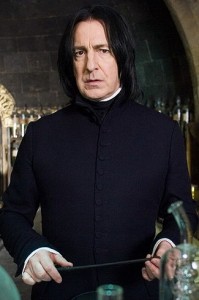 According to Wikipedia, Saverus Snape

is a person of considerable complexity, whose coldly sarcastic and controlled exterior conceals deep emotions and anguish. … Snape is a teacher who is hostile from the start toward Harry and is built up to be the primary antagonist….

As for Draco Malfoy, Wikipedia tells me

As I think about my characters Alexander and Flavian, I could say the same about them except I would not characterize Flavian as cowardly … he is a bully for sure, but not cowardly.  As I study the image of Snape on Wikipedia (portrayed by Alan Rickman), I believe Rickman would suit Alexander’s role well if the story ever went to film.

Given the length of the book, the reader will find other ‘villains,’ but none play the pivotal roles of Alexander and Flavian.

If you’ve read Gaspar, I think you will understand Fra Michalenko’s reference to the Harry Potter characters.  If you haven’t read the book, you might consider putting it on your list, just as I will add Harry Potter to mine.

2 thoughts on “Gaspar and Harry Potter”