A codex is a book made up of a number of sheets of paper, papyrus or vellum (parchment made from calfskin, even wood block, with hand-written content.  In a sense, a codex is like a three-ring binder.  The Romans introduced the codex in the first century, and codexes (or codices) gradually replaced scrolls.

The Codex Boernerianus is a small New Testament codex attributed to Irish monks – some say Sedulius of Liège – and written in the 9th century.  It contains the Pauline Epistles on 99 vellum sheets.  The main text is Greek.

Oddly, at the bottom of folio 23 there appears a verse written in Old Irish, which refers to making a pilgrimage. 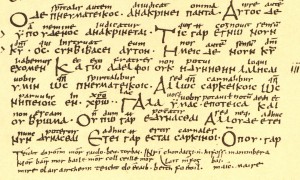 To go to Rome
Is little profit, endless pain;
The master that you seek in Rome
You find at home or seek in vain.

Earlier in the week, I received a comment from a friend who had completed Gaspar, Another Tale of the Christ.  He wrote, “Gaspar’s 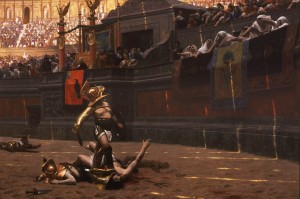 time in Rome reminded me of ‘To go to Rome is little profit …’  Are you familiar with that one?”  I was not until Fra Michalenko had shared the comment.  Now I am, and you are as well.

As I reflect on the sequence in Rome, Chapters 11 and 12 – Reunion and The Gladiator – I smile inwardly because it is very much in concert with the Old Irish comment that appears in the Codex Boernerianus.  If you’ve read Gaspar, Another Tale of the Christ, I know you will see the connection, too.  If you haven’t read the book, I invite you to put it on your reading list.  Thanks for your continuing interest and support.