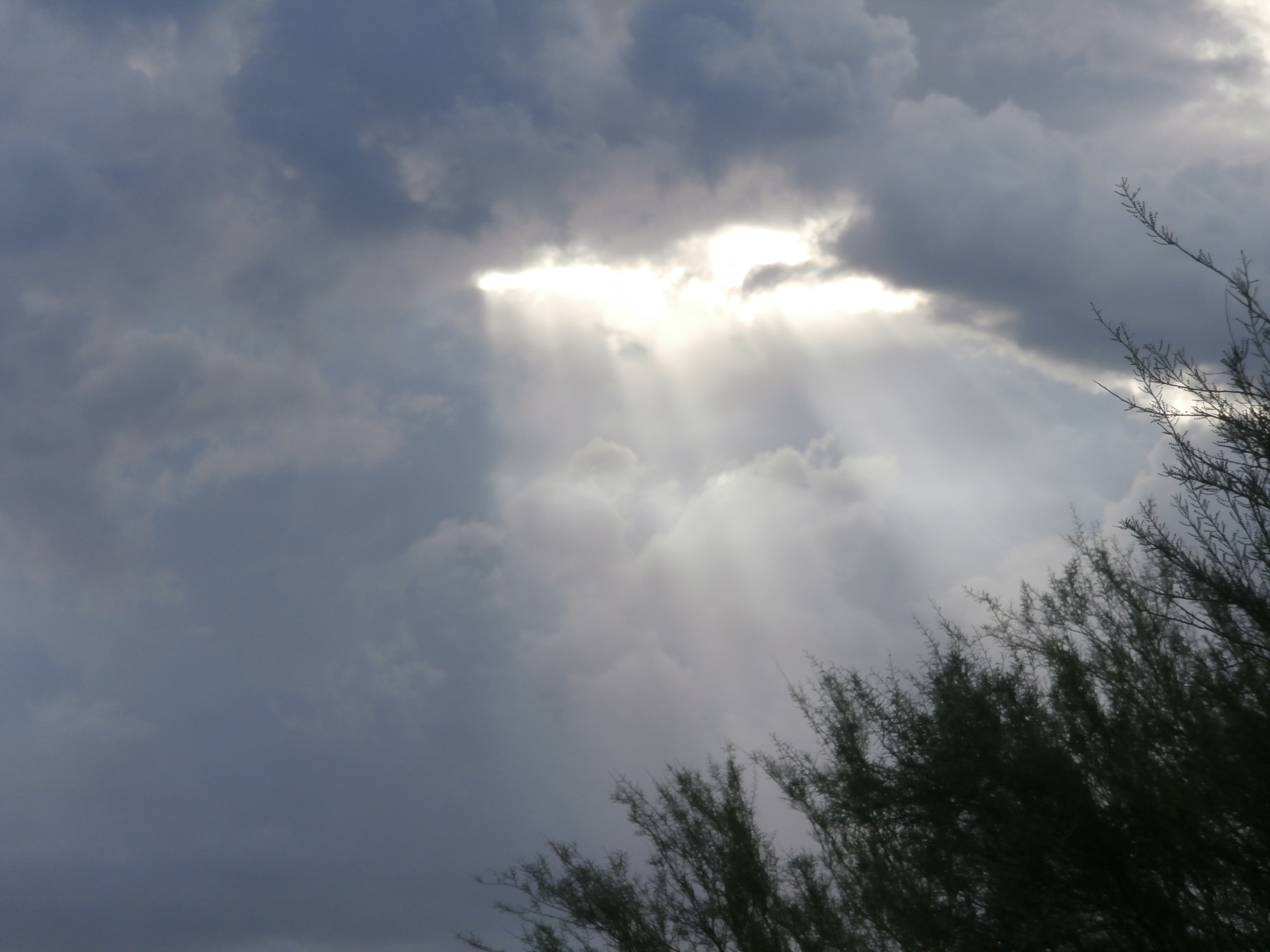 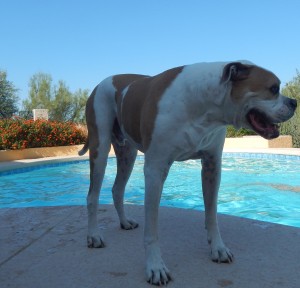 With more good friends in my lifetime than any 10 men deserve, Caesar was my best.  This morning, I freed his spirit from his cancer-riddled body.

Unwittingly at the time, I cast his memory into future generations by including him in two of my novels.  When people ask me which of my books I like the best, I tell them The Hamsa and Tobit and the Hoodoo Man.  I think it is because Caesar plays a significant – though not so obvious role in each of them.  I named him Raphael in The Hamsa.  In Tobit, I unabashedly use his given name, Caesar. 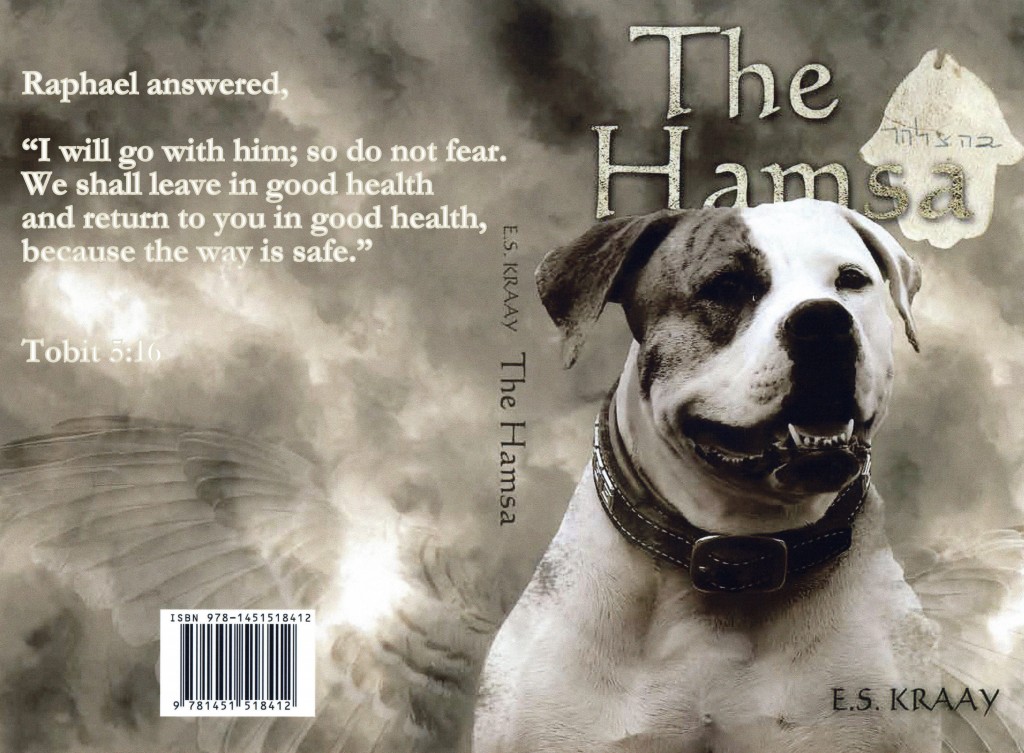 His likeness graces the cover of the Kindle edition of The Hamsa replete with angel wings!  As I researched and wrote the book from 2008 to 2010, Caesar always sat by my desk waiting for a frequent pat on the head.  In the opening pages of the prologue I wrote,

“Last night, I held my own dog as he took his last breath. I cried.  Maybe the dog was really holding me, and not I, him. His name was Raphael.  I think he was an angel.  I am ready to follow him to the feet of God.”

Those words felt prophetic this morning as I held him close to me in the clinic.  In The Hamsa, Caesar/Raphael appears to Bronisław Czech in the story exactly as he appeared to me in real life, as a guardian angel that I turned to whenever something was bothering me through his nine years.  He was always there and he never let me down.

When Bronisław meets Father Michael in Rome, the priest describes the dog,

“He [Father Michael] ruffles Raphael’s ears.  One is white like his body, the other brown like a deer, and a brown patch covers his left eye giving the appearance that he is wearing a mask.  ‘You, my friend,” he tells the dog, ‘Care for this man and lead him from the city on the ‘morrow.’”

Caesar was our rock and our common ground that helped us through every challenge we faced during his too short lifetime.

Now an inmate in Auschwitz, Bronek introduces his dog to his friend,

“This is my dog,” I whisper through swollen lips.  “His name is Raphael.”

“And where did he come from?”

I wrote in the story what I believed about my dog in real life:  he was heaven-sent.  We did not expect Caesar to die so young, but the cancer that invaded his body was aggressive.  When I returned home from church this morning, I could see in his eyes and in the way Marie caressed his large, beautiful head that it was time to say goodbye.  As I sat on the floor with him at the clinic, I could not help but recall the scene I penned in The Hamsa when it was time for Raphael to leave,

When I swing my legs to the floor, Raphael moves closer and I hug him with more love than I would hold a woman, maybe even a child.  He allows it.  I walk outside and sit on the top step.  He follows me and lies down with his large head on my lap.

The night sky is brilliant.  Earth bears the light without damage and watches as Draco threatens the North Star.  Softly, I hum the highlander’s song as if it is a lullaby for my dog.  Raphael’s pulse slows … He dreams of good things and makes soft, happy sounds.  I lean close to feel his warm breath on my cheek.  I so envy the dog the peace that follows him.  I take the chain with the hamsa from my neck, and put it to my lips.  It smells of ancient clay and perspiration.  I wash it with a single tear and see that the letters are worn and unreadable.  B’hatzlacha.  I think of little Yeheil in Bavaria.  He would like Raphael.  I kiss the hamsa and place it reverently around the dog’s powerful neck.  As I do, he raises his beautiful eyes to me, and they say, “Do not be afraid.”  I place my lips close to his ear and whisper, “I am not.”  His head falls to my lap and he breathes his final breath.  I try to hold him, but his spirit knows it is time for him to leave me.  He follows the voice and is gone.  My arms grasp only air.  I weep into my hands, empty save for the hamsa.

I held Caesar closely this morning as his spirit left his worn body and soared.  The moment it did, I recalled the final two sentences in The Hamsa,

“A mighty angel with outstretched wings descends towards me to take me home.  I commend myself to him and to his God.”

And so I do the same with my best friend Caesar. 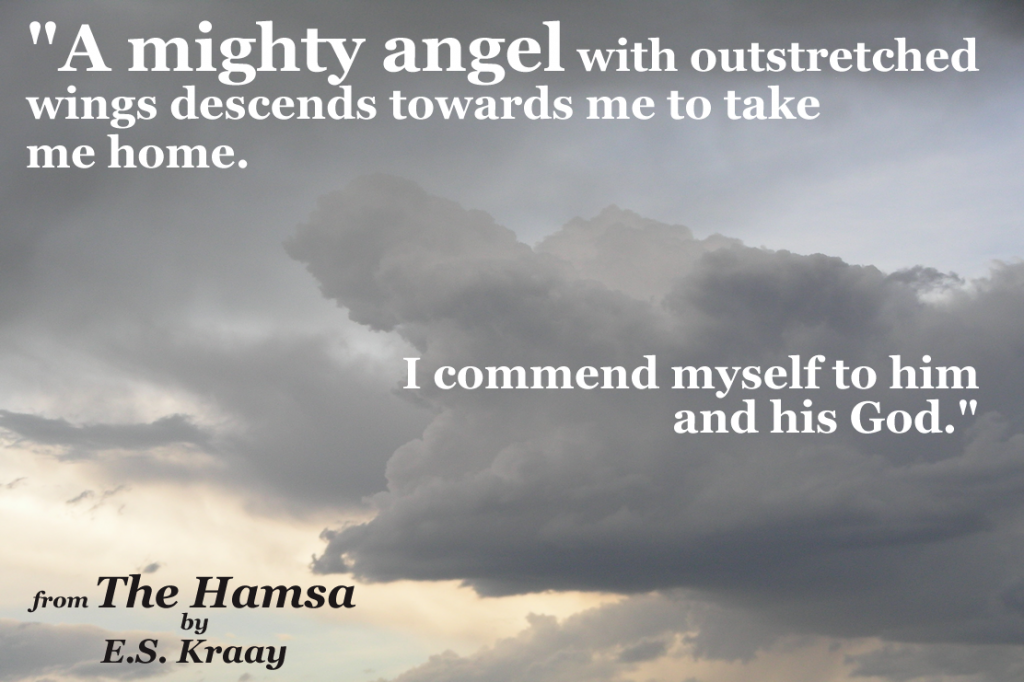 3 thoughts on “Goodbye to My Best Friend”