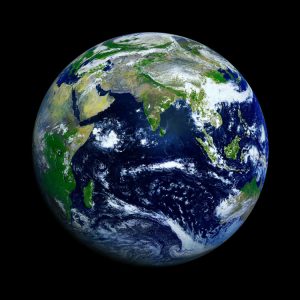 According to Google, the circumference of our great planet Earth is 24,901 miles measured around the equator.  That’s a long ways.  How does one put that distance into understandable and meaningful perspective?  Based on a 50-mile commute over a 5-day work week, you could do it in two years.  If the distance from the east to west coast in the United States is 2500 miles, to travel around the world would be to drive across the United States 10 times.  A Russian would have to cross his country four times.  If you traveled around the earth one time, you’d be 15% of the way to the moon.  I pedaled those 24,901 miles through snow and ice, sand and desert in six years, nine months and four day on my bicycle.  Well, at least I did it in my mind as I cranked out the miles in the Sonoran Desert from 2010 to 2016 ….

Distance, like time is relative, but a mile in Grand Rapids, Michigan is the same distance as a mile in Kinshasa.  I pride myself in putting more miles on my bicycle every year than I do on my automobile.  I don’t think I need the car anymore.  The bicycle doesn’t use fossil fuel, nor does it require insurance.  I can pedal or walk to those places I need and choose to go. 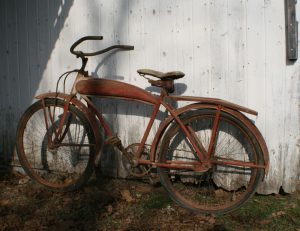 In 1955, my father presented to me the first bicycle I could call my own.  Red paint covered the rusted, beat up fenders, and the tires were thick and bald.  Nothing fancy.  Just a plain bike that had faithfully served other kids in years past, kids just like me.  One speed, one gear, but it got me where I needed to go.  “It’s time you learned to ride a bike,” my father proclaimed.  He placed my skinny frame on the wobbly seat, ran along side with his firm hands grasping the frame, cigar smoke trailing us like a contrail and pushed me off into the wild blue yonder for better or for worse.  I added more dents and scratches that first day – to me and the bike – but within a day or two, I was on my own and free to roam the familiar streets of Pittsfield wherever and whenever I chose to do it.  Kids felt safe when I was a child.

The wire basket attached to the front handlebars begged to carry something important and one sunny summer morning, my mother asked me if I would run an errand to the West End Market for a loaf of bread.  Ah, duty called and I was ready to answer! 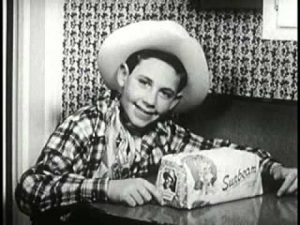 “Watch out for the trucks,” she cautioned me as she wiped her hands on her apron.  Garbage trucks, work crews and snowplows moved in and out of the public works department next to the market with the regularity of bees at a hive.  I smiled and nodded, pleased that my mother entrusted me and my bike this important mission.  “Here’s 15¢.  Get Sunbeam.  Use the change for whatever you’d like.”

The small, brick building commanded the street corner across from Pomeroy Elementary and attracted the after school kids to the candy counter, but it was quiet on this Saturday morning in the heart of summer vacation, much like the truck corral next door, although I noticed the gate was open as I drove past.  I leaned my bike against the brick wall, went into the market and completed my business.  I placed the loaf of bread in the basket as carefully as a young mother would arrange her precious cargo in a baby carriage.   After stuffing the two Bazooka Joe bubble gums into my mouth, I moved out.

No trucks, although someone had unraveled a hose as thick as an elephant’s trunk that ran from the garage to the sewer drain on the corner.  I didn’t think anything of it, but when I hit that hose, the front wheel popped up and transformed my bike into a bucking bronco.  I fought the handlebars with both arms and it took all my strength and concentration to stay upright.  As I did, the bag of Sunbeam bread flew high in the air turning end over end directly over my head.  When I regained control of my bike, I skidded to a stop and turned around to retrieve the bread.

Horror upon horrors!  An empty dump truck pulled out of the garage.  The driver stopped with his front left tire squarely upon my package.  He looked both ways, saw me, smiled and waved and turned left up West Housatonic Street leaving me on my bike staring dumbly at the loaf of bread that had been reduced to less than one, thin inch in height with its guts spilling through the popped bag like the entrails of dead rabbit who didn’t make it across the road.

My first day of responsibility, and I blew it.  Tears welled up like a tidal wave.  I had no desire to return home to face my mother.  She just wouldn’t understand.  But where would I go with no money and how long could I survive on a flattened loaf of Sunbeam bread? 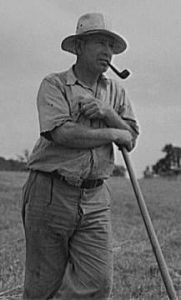 About that time, old Bobo Dapson came walking down the street in my direction.  “What’s a matter, boy?  You don’t look too happy.”

I explained my predicament.  Bobo took that mauled bundle of dough and studied it carefully.  “Hmmm,” he said.  “I know a sick dog who’d love this bread.  Tell you what,” he said as he pulled his change purse from the center pocket of his coveralls.  He opened it and fingered through the coins.  ”I’ll give you 13¢ for that loaf, but don’t you be tellin’ my wife.  She’d be mighty angry knowin’ I bought a loaf of bread for my friend’s dog.  Whatddaya say?  We got a deal?”

I sniffled back the tears, hawked up a lugie and let it fly.  “We got a deal.  Thanks, Bobo, and Gogi’ll never know.  Our secret.”

I retired that old bike in ‘59.  For my tenth birthday, my dad got me one of those new Huffy’s with three speeds.  It even had a headlight powered by a generator that ran off the back tire.  That Huffy was pretty special, alright, but the day of my sixteenth birthday – the same day Fidel Castro told his fellow Cubans anyone who wanted to emigrate to the United States was okay by him – I traded the bicycle in for a driver’s license and never looked back …. Until 2009, the year I turned sixty.  That is the year that I decided to make cycling a part of my daily regimen.  I haven’t looked back since.