While The Olympian remains my best-seller, my heart belongs to The Hamsa.  Based on the life of Olympic skier Bronisław Czech, I refer to The Hamsa as ‘a Holocaust story.’  You see, Czech was the 349th person incarcerated at Auschwitz.  The Hamsa is a story of human dignity.

In 2016, eight years after I penned the opening line to The Hamsa – “My mother had a dog.” – I traveled to Haiti with Tony Sanneh and have since become irrevocably part of his efforts to empower kids, improve lives  and unite communities in the poorest country in 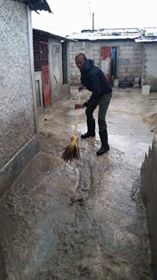 the Western Hemisphere.  The people I have met here have been tested by earthquake, poverty, violence and most recently Hurricane Matthew and through it all, they refuse to give up. They hold on to their human dignity as fiercely as Bronisław Czech did as his world fell apart in September 1939 when the Nazi Wehrmacht invaded Poland.

In his ‘Letter from Birmingham Jail,’ Dr. Martin Luther King, Jr. proclaimed, “We must use time creatively, and forever realize that the time is always ripe to do right.”  If truer words have been spoken, I do not know them.  Dr. King’s words struck me like a sledgehammer during my first visit to Cité Soleil.

“The time is always ripe to do right.”

I have made two trips to Haiti this year, and I will return a third time in December.  I am drawn to the human struggle.  I am drawn to men, women and children like Bronisław Czech who cling to their God-given dignity and refuse to let anyone or any disaster take it from them.  The time is ripe for me to help.  While I invite you to join me on an Impact Trip with the Haitian Initiative, here are two simple ways for you to support my efforts:

“The time is always ripe to do right.”