A collection of 84 readings drawn from multiple faiths to inspire spiritual contemplation and thought.  Seven days, three hours – sunrise, midday, and sunset – and four offerings each hour.  A companion to encourage daily prayer and meditation.

“It is in the shelter of each other that people live.”

Light emerges from the heart of darkness in this WWII historical novel set in Holland.

Raised by a widowed fortune-teller, 5-year-old Jessica knows nothing about Jews until Mrs. Houthakker and her daughter Nava rent the house next door in the summer of 1939. Jessica and Nava befriend a young Dutch boy who they meet ice skating on the frozen canals. The three friends discover an orphaned deaf Jewish child, separated from his older brother in the aftermath of Kristallnacht. Mrs. Houthakker and her husband welcome the lost child into their home.

When the Nazis invade Holland, a fighter squadron is assigned to the airfield near the school that Mrs. Houthakker organizes when Hitler excludes Jewish children from public schools. Messerschmitt pilot Anthony Küster meets the four young people who remind him of the sons he has not seen since the war began. He chooses to spend his free time on the ice with Jessica and her friends.

Collateral damage from an allied bombing raid changes everything, and when Hitler orders the Jews to special camps, the pilot knows what he must do to save Jessica and live the remainder of his life at peace with himself.

“I am the same to all beings”

E.S. Kraay’s Gaspar, Another Tale of the Christ is the story of one man’s remarkable search for truth.  Told in the words of an unwitting wise man, the narrative spans four decades from young Gaspar’s time at the Kanheri caves in India with the ancient Buddhist Vajrabodhi to his witness of Christ’s crucifixion at the behest of his friend Pontius Pilate.

In the intervening years, Gaspar translates ancient scrolls on the shores of the Dead Sea under the tutelage of the Zadokite priest Barjadek, and ten years later, he instructs at the Greek Ptolemaeum in Athens where he meets a mysterious boy from Judea.  Always thirsting for knowledge and committed to his quest for truth, Gaspar embarks for the end of the world where the sun sets to find the Earth Mother.  Mentored by the druid Evenor in ancient Fál, he discovers that truth is the same at both ends of the world and that a new era is about to dawn, an era foretold in ancient writings from many sources including the book from Atlantis his Keltic friends claim is written in the language of the moon.  Certain that the time is now, Gaspar journeys to Rome and befriends Pontius Pilate and his wife Procula.  At Pilate’s invitation, Gaspar returns to Judea where he believes he will find the Lord of Righteousness.

Steeped in history, abounding in spirituality and rich in insight, Gaspar, Another Tale of the Christ will challenge the notions you hold of people and places you think you know.

One day in the life of five brothers and a strange hobo who reveals the secret of creation.  Abandoned by deadbeat parents, each boy has a special gift.

The day of Sam’s fight with The Polish Dropper, Flap Jack and Robert befriend a luckless wanderer and bring him home for supper.  When Sam and Jimmy leave for the Armory to ply their trades, Peter reads a special story to his little brothers, a story that puts life into proper perspective.

“Who is this old man with all of the answers?”
“You boys know Popeye the Sailor Man?”
“We seen him in the funny papers.”
“I s’pose I be like Popeye.  I yam what I yam.”

What’s better, animals or people?  The Sixth Day is the pivotal day in history, the day God almost quit.  A quirky, feel good story that you will not want to put down.

“He pulled his weapon from his holster and opened the chamber.  After inserting one cartridge, he spun the cylinder, put it to his head and pulled the trigger.”

When does the law cease to serve justice?  When is action beyond the letter of the law justified?  When?  By Whom?  E.S. Kraay — best known for his three historical novels — explores new territory with his cop-thriller DWI: Dying While Intoxicated.

Harold Huck is a happily married man with two fine sons and a beautiful wife.  In 1965, life in the Berkshire Hills of Western Massachusetts is grand, happy and carefree…

By 1980, things have gone wrong, very wrong.  One by one, Harold’s family falls victim to drunk drivers.  1966, oldest son Jimmy is victim to a hit and run, and the secret to the killer’s identity is contained in a letter from Vietnam… 1979, youngest son George, a police officer ‘just like his old man’ dies in a head on collision in pursuit of a drunk driver… 1980, wife Eleanor finds no reason to live and commits suicide.

Five years later, Harold’s smoldering remorse ignites into a personal vendetta that stands a quiet community in Berkshire County on its head.  A tragic and lonely man, Harold takes the law into his own hands to set things right.  No one deserves to die at the hands of a drunk driver.  When justice is blind, it cannot read the law.

Nothing happens by chance.  Luck always runs out.  Local drunks Puggy Demerle and Eddie Kunzler have played the game for too many spins of the wheel.  Sooner or later, your number comes up.  Or does it?

Harold Huck’s justice is beyond the law, but he doesn’t care.

An apocryphal story set in the Civil War South … the story of a man whose blindness enables him to see.

” I never regard any narrative as unhistorical simply on the ground that it includes the miraculous.“

“When everything was hopeless, Abraham believed anyway, deciding to live not on the basis of what he saw he couldn’t do but on what God said he would do.”

In the nineteenth century as America struggles with its morality, southern educators journey to South Carolina to test Dixie’s physical fitness in games of strength that pit white students against black slaves.  Lasting friendships emerge, friendships that endure the pain and suffering of plantation life before, during and after the Civil War, and friendships that rise in the face of racism in an age when hatred is as common as love.  The most bizarre yet significant bond is forged between the young black champion Tobit and the half-breed highwayman — the self-proclaimed Hoodoo Man — who Tobit encounters as he returns to Nineveh, his master’s plantation in ante-bellum Georgia.  Accused of abetting a runaway slave, Tobit is blinded and left a broken man by the sadistic overseer Wolfenbüttel.

Twenty years later at the end of the war, Tobit sends his only son Tobias on a quest through the ravaged southland to find the Hoodoo Man who may be the only one who can save Tobit and the people of Nineveh from the hate and greed of a nation in the throes of rebirth.  Accompanied by a young priest, Tobias surmounts each obstacle he meets and returns to Nineveh for a final confrontation with the Circle of Brothers that will determine the fate of freed men everywhere.  Believe the unbelievable!

Tobit and the Hoodoo Man exceeds the limits of historical fiction and can only be classified as a ‘mystical tale’ that challenges its readers to believe the unbelievable.

“They can take everything you own, everything you cherish and hold dear, but they cannot take your dignity unless you let them.  There is a light in the heart of darkness.”

Bronislaw Czech is a dashing Polish highlander born in 1908 with skiing in his blood.  He is a racer and a jumper who represents his country in three Winter Olympic Games, which teach him as much about life as about sport.  He is honored to lead his team and carry the Polish flag into the stadium at Germany’s 1936 games in Bavaria.  With him always is the hamsa, a good luck charm he receives as a boy in 1923 from a young Jewish girl.  when Germany invades Poland in 1939, Czech’s mountain skills make him a valuable asset to the Polish resistance and a target for Hitler’s SS.  From the majesty of Europe’s greatest mountains to the shores of America and back … from the height of Olympic glory to the depths of human cruelty and suffering, The Hamsa spans four decades of one man’s struggle to preserve his dignity in the face of ‘the final solution.’

The Hamsa is not a history book and was never intended to be.  Still, historical fiction can plant the seeds for further research and investigation.  I truly hope The Hamsa will encourage its readers to learn more about those courageous souls throughout history who, faced with the most extraordinary situations are able to rise above the common man to face their challenges with dignity.

A Hero is Born

“Greatness lies not in being strong, but in the right using of strength; and strength is not used rightly when it serves only to carry a man above his fellows for his own solitary glory.  He is the greatest whose strength carries up the most hearts by the attraction of his own.”

It is the 75th Olympiad by Greek reckoning.  The strongest, fastest, quickest and most agile men in Hellas gather at Olympia to celebrate life through athletic competition.  Every four years, the Greeks declare their sacred truce and ban war and conflict from their borders for the duration of the games.  That same year, 480 BCE by our reckoning, the Persian empire rules the known world save for that small peninsula dominated by a dozen democratic city-states.  To avenge the defeat of his father on the Plain of Marathon 10 years earlier, Xerxes, the Great King amasses an army a million men strong to bring these free states to heel.  With no regard to the sacred truce, Xerxes and his Immortals continue their steady march to smother democracy.  Amid the cheering crowds, the sweat, dust and blood of the Elean fields of friendly strife, and threatened by the impending clash of armies with the fate of Western civilization in the balance, two men, one a boxer, the other a poet come to understand that the true worth of a man is based not on what he does only for himself, but on what he does for his fellow man.

In August 2008, E.S. Kraay was interviewed by Hellenic Public Radio, COSMOS FM 91.5 in New York City.  The interview was conducted by Amalia Goros.  The conversation offers interesting insights into the book and the purpose behind it.  Click on the COSMOS logo to listen to the interview.

John Trikeriotis, well-known Thermopylae expert and member of the Leonidas Expedition interviews E.S. Kraay and explores the book, the writing craft and the ancient world of Hellas through a series of thought-provoking questions.

The Tucson Mountains
and
The Picture Rocks Wash 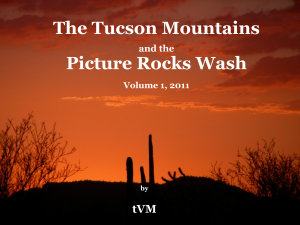 This PDF book is available for free download on ‘The Store’ page.  It is a collection of photographs from the Sonoran Desert in 2011.