An update on The Olympian: A Tale of Ancient Hellas audio book …

Last summer, Alistair McKenzie and I contracted together for our second audio book.  If you’ve heard The Sixth Day: a 17,175-Word Novella About Creation and Prizefighting, you will understand why I am such a ‘McKenzie’ fan.  His interpretation of The Sixth Day is unquestionably responsible for why the novella is currently under contract with HopLite Entertainment for production in 2014 as the film “Third Man.”  Just last week at Christmas dinner, my oldest son Nick was kind enough to tell me, “I hate to say it, Dad, but the audio book is better than your book!  Alistair McKenzie is incredible.”  Despite the fact that Nick obviously mis-spoke, he is quite correct that Mr. McKenzie is ‘incredible.’

Earlier this week, Alistair McKenzie completed his production of The Olympian.  The journey was long, but the final product is worth it.  I expect the audio book will be available on Amazon, Audible and iTunes in two weeks or so.  I will alert you when it is available.  In the meantime, I hope you enjoy this three-minute sample.  To set the stage …. Theagenes and Simonides have witnessed the demise of the 300 Spartans.  After Xerxes and his Persian horde clears the pass at Thermopylae, the boxer and the poet prepare a grave for the fallen Hellenes, and Theagenes reads the eulogy Simonides is well known for. 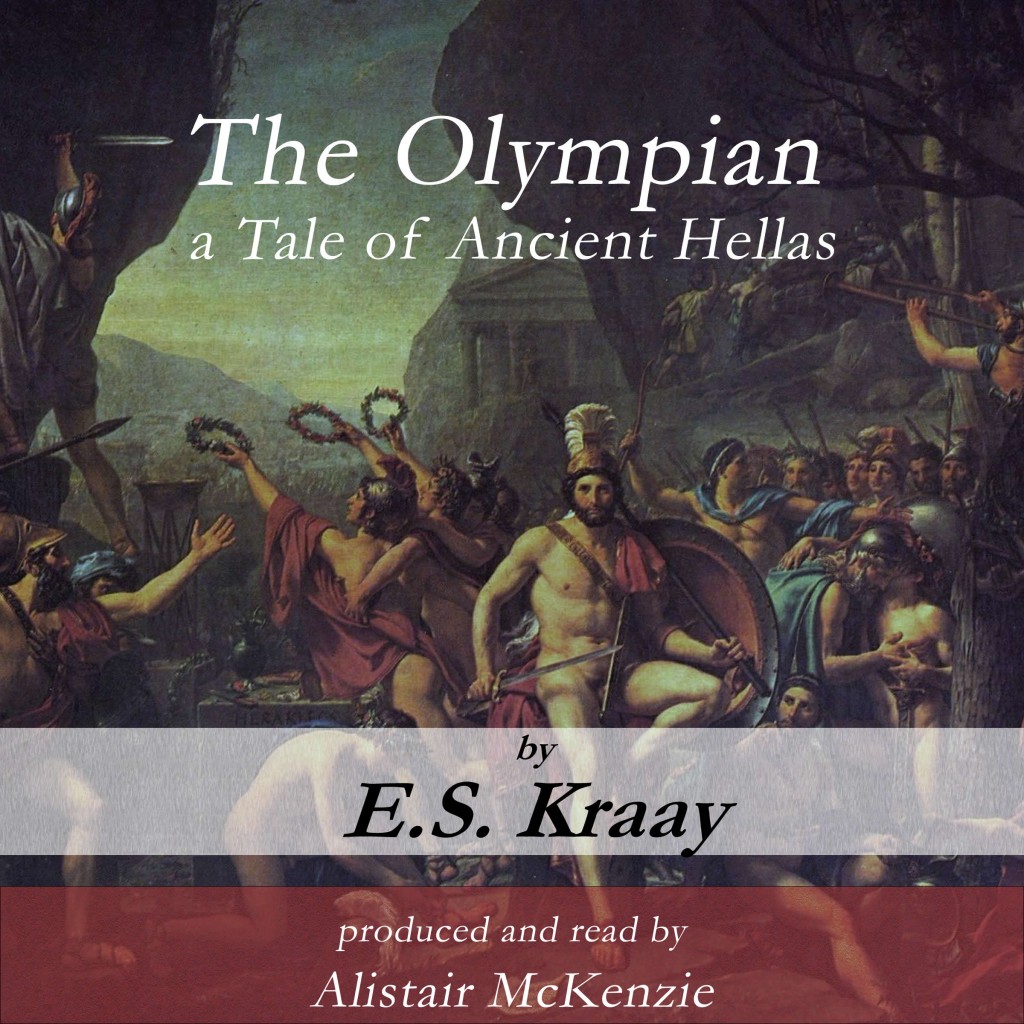 The story behind The Olympian: A Tale of Ancient Hellas has been floating around my head since I was a kid and saw Rudolph Mate’s 1962 film “The 300 Spartans.”  Thirty-six years later, a friend tossed Steven Pressfield’s book Gates of Fire on my desk and said, I think you would enjoy this.”  My friend was correct.  A few years later, I was getting serious about writing a book.  I wanted to write about the real worth of a human being … what gives a person’s life value.  The Spartan stand at Thermopylae was how I envisioned telling the story.  Then I read an article about an ancient Olympic boxer, Theagenes of Thasos who won the boxing competition at the 75th Olympiad in 480 B.C.

By pulling the two events together — the Olympic Games and the Battle of Thermopylae — I developed the story I wanted to tell to present my core concept: the worth of a man is determined not by what he does for himself, rather by what he does for others.

In 2002, my son Brad and I had dinner with Steven Pressfield at a small Italian restaurant in Malibu.  I ran the idea by him.  He liked it and encouraged me to go for it.  Six years later, the book was in print and the film rights optioned.

From my perspective, every book of value is about ‘something.’  Perhaps my belief in that statement is a by-product of having to write book reports all through my primary and secondary education.  Education has changed significantly in that regard; I don’t believe even reading books is a prerequisite for graduation anymore, much less writing reports on them.  That is a shame.

The Olympian: A Tale of Ancient Hellas is about the worth of a human being.  It is set in ancient Greece and action takes place at the Olympic Games and concludes at Thermopylae, but it is not about those places or events, or about the two main characters, Theagenes the boxer and Simonides the poet.  The book is about human values.  My core statement that is at the heart of the book:  The worth of a man’s life is judged not on what he does for himself, rather on what he does for others.  Some time after the book was published, I came across this quote from 19th century clergyman and social reformer Henry Ward Beecher that describes the heart of the book better than anything I’ve read.

“Greatness lies not in being strong, but in the rightly using of strength; and strength is not used rightly when it serves only to carry a man above his fellows for his own, solitary glory.  He is the greatest whose strength carries up the most hearts by the attraction of his own.”

The Hamsa is about human dignity.  Unlike The Olympian, which spans a few weeks — though flashbacks delve into earlier events — The Hamsa spans a man’s lifetime and the story chronicles three Winter Olympic Games — 1928, 1932 and 1936 — and the events described in the novel occur mostly in Europe but also America.  The final chapters conclude in Auschwitz.  But the book is not about these places and events, nor even about its protagonist, Bronisław Czech.  The novel is about human dignity and my conviction that all men are born with dignity.  No one can take a man’s dignity from him.  He can give it away, but no one can take it from him if he refuses to give it up.  Every part of the book focused on that conviction.

Tobit and the Hoodoo Man: A Mystical Tale from the Civil War South is about doing the right thing under the most dire of circumstances.  I chose to set the story in the Civil War South and to tell it from the perspective of a black slave.  It is not about the War Between the States or slavery.  It is about making the right choices to advance the goodness of the world.  Each man faces choices every day of his life.  If we choose to do the right thing — which is often is not the easiest alternative — our lives will be of the greatest value to humankind.  That statement is at the heart of the book and every event turns on that core statement.
The heart of every book — what the book is really about — should be branded in our brains from start to finish, and every word in the book should be written to support that idea.  My current project is about truth.  Truth is universal regardless of its source.  That statement will guide me from the first word to the last.  With the core idea firmly embedded in the writer’s mind, her story will hold together and reward him with a work of authenticity with the potential to bring value to its readers.