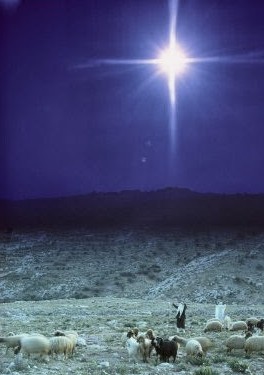 Yesterday, I received an email from an old friend and teammate, gentleman Sean Riley.  He just completed reading Gaspar, Another Tale of the Christ.  When I get back home, I will add his comments to the “What They’re Saying” page.  Sean recalled a few years back when I started writing Gaspar that I put the nativity sequence up on the website as a download.  He asked for a copy so he could read it to his grandkids on Christmas Eve.

With thanks to all the people who have taken time to comment and review my work since The Olympian was published in 2008, I have to admit that Sean’s request means more to me than any I’ve received.

Every Christmas, I try to put up a free download on my websites as a gesture of my appreciation for the support and inspiration I get from readers and subscribers of my websites and of my novels.  Two years ago, I put up the draft of the nativity sequence from Gaspar.  I titled the nativity sequence The Star, which is the title of the chapter from which I take it.  In December 2012, I wrote that I expected the book to be out by December 2013.  I was only a year off!

As I was preparing the short manuscript for download, I had another wild idea.  I called my friend and business associate Alistair McKenzie in Los Angeles.  Alistair produced the audio books for The Sixth Day, A 17,175-Word Novella About Creation and Prizefighting and The Olympian, A Tale of Ancient Hellas.  He also wrote and performed the song We Pray for Light, which will undoubtedly be featured in The Sixth Day film – working title Third Man – if we get lucky and see it to fruition.  I asked Alistair if he would consider reading the sequence and producing a short audio.  He agreed.  I pushed the envelope and asked him if he would consider writing a Christmas song to accompany the reading.  Within a few days, he sent me his draft, an amazing original song tentatively titled We All Know.

When I told my friend Father Paul Coury at the Redemptorist Center what I was up to, he encouraged me to ‘witness’ why I wrote Gaspar and to read the sequence and play Alistair’s song at all three Masses over Epiphany weekend, January 3 and 4, 2015.  I thought about it and called Alistair to discuss it.  With little hesitation, Alistair McKenzie agreed to come to Tucson and read The Christmas Story from Gaspar at Our Lady of the Desert Church at the Redemptorist Center over Epiphany weekend.  More on that later.

This is my initial announcement that this special gift – a PDF download of Gaspar’s Christmas Story, Alistair’s audio produc

tion and accompanying Christmas song – will be available for download at no charge later this month.  Please look for it and spread the ‘good news.’  As much as I want to say this is my gift to you, I know it is as much a product of Alistair McKenzie’s generous and creative heart.  More to follow soon ….. In 1916, this is what C.S. Lewis wrote to his childhood friend, Arthur Greeves.

“Whenever you are fed up with life, start writing:  ink is the cure for all human ills, as I have found out long ago.”

I think he’s right.  Although I first penned The Olympian, A Tale of Ancient Hellas in 2002 through 2004, I didn’t move into high gear until 2008 with The Hamsa, and then I worked ‘after hours’ as I was still imprisoned by corporate America until I broke the chains in 2011.  Through the years, I’ve produced nearly a million creative words.

I manage and write for three websites.

I’m closing in on a million words.  Compared to Steven King and Dean Koontz, that’s not squat diddly – or is it diddly squat.

The other day, someone said to me, “But you’re retired ….”  Retired?  It is a fact that I left traditional employment several years ago.  I tried to escape corporate America initially in 2002, but got sucked back in from 2004 through 2011 when I finally escaped with no regrets.  Retired?  One million words over four years when I moved into high gear is 684 words each day, 365 days a year.  Try writing 700 creative words a day for one month.  I challenge you.  Tell me how easy that is.

I agree with C.S. Lewis.  I do receive comfort from the process it takes to transfer an idea to a piece of paper.

When all is said and done, every week some reader somewhere makes my day with a comment on something I’ve written.  That is not vanity as we’ve read all week in the Book of Ecclesiastes.  It is a reward for the countless hours that go into each page that leaves my desk.

Last week, I was walking through the Redemptorist campus on my way to the monthly book club discussion.  I converged on a path with my friend Sarah.

“Why’s that?” I countered.  “Don’t you enjoy these discussions?”

“Absolutely,” Sarah replied, “But I only have 60 pages left to read in your new book Gaspar.  It is one, incredible book, and it really pained me to put it down to come to this meeting.”

“Sarah, you just made my day,” I said with a broad grin on my face.

To quote C.S. Lewis a final time, “Ink is the cure for all human ills.”

Thanks, C.S. Lewis, thanks Sarah, and thanks to all of you who have read Gaspar, Another Tale of the Christ and offered me your comments.  You’ve made my day.

The Old Man explains to Flapjack, Robert and Peter why God created anything in the first place! I began my morning at the Easter sunrise service at the Redemptorist Renewal Center in Picture Rocks Arizona on the fringe of the Sonoran Desert.  Not a better way to start an Easter Sunday…..

Until this weekend, the youngest person to read one of my books was my grand nephew Christian who I believe read The Olympian shortly after its initial publication in 2008.  If anyone knows differently, please let me know.

This Easter weekend, we were blessed with a visit from my three sons – Nick’s wife Terri and Jesse’s VERY good friend Erica, too – and my eldest niece, Kira, her husband Phillip and two young sons Andrew, 11 – a future NBA prospect – and Michael – a free-spirited youngster with spunk.

Our history with Kira goes back to the early 70’s when she was just a little girl, and when Marie and I had been married for about one month.  Kira and Christian’s father Sean lived with Marie and me for several months in Alaska.  Years later, Kira and Sean would visit and stay with us on our farm in Upstate New York.  Fast forward ….

After a few sessions of basketball at the park and a good hike at Sanctuary Cove, we shared a barbecue Saturday afternoon.  What has this to do with writing book?

As Kira, her terrific husband Phillip and sons Andrew and Michael prepared to leave and return to California, I gave them audio books of The Sixth Day: A 17,175-Word Novella About Creation and Prizefighting and The Olympian: A Tale of Ancient Hellas.  I also gave them a hard copy of The Sixth Day and The Hamsa.  It was small recompense in return for the wonderful visit and Phillip’s gift of a subscription to Parabola.

Just minutes after they left the house, Kira sent me this picture of young Michael – eight-years old – trying to read The Sixth Day in the back seat of their mini-van as they returned to their hotel.

Frankly, the picture made my weekend.

Just over a month ago, I posted a piece about when ‘people get it.’  And then, I receive this picture from Kira …. Because The Sixth Day is written in Ebonics, young Michael will struggle with it.  I have cautioned his Mom that the ‘F’ word shows up once, maybe twice and the ‘N’ word appears occasionally, but that is consistent with the time period in which I told the story. Whether or not Michael ‘gets it,’ I can see the concentration on his face as this eight-year-old boy points to each word and does his best to sound them out … “John Paul was a boy with two first names ….”

Eventually,  young Michael will ‘get it!’  What made my day?  Tough call:  Andrew and me playing 2v2 against a pair of high school players from Mountain View and losing 12 -10, ‘make it, take it;’ or Michael trying to read The Sixth Day.  Regardless of the choice …. what a day! Flapjack and Robert tell the Old Man they know all about heaven.