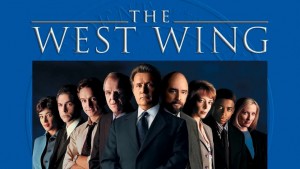 Several months ago, I ordered a book for the bookstore, an autobiography of Martin Sheen by Sister Rose Pacatte called Pilgrim on the Way.  I asked my wife to read the book when it came in.  She enjoyed it and suggested I read it, too.  I found it very interesting and insightful, a story about a man in Hollywood whose faith grew stronger through a career that has lasted 50 years in an environment not known for its affinity to spiritual faith.

After reading the book, we decided to watch The West Wing on Roku.  We just finished season 2.  We have been rapt by the story and Mr. Sheen’s portrayal of President Josiah Bartlett.  Just last week, Crystal, the checkout lady at Sprout’s asked me if I was planning to watch the Republican debate.  I told her know.  She laughed, “Don’t you want to know about the candidates?”  “I really don’t care,” I answered.  “The only person I would vote for is Martin Sheen!”

Marie and I just finished Season 2, which concluded with Episode 22, “Two Cathedrals.”  That episode is the absolute best writing I have ever been exposed to in over 60 years of television.  It was made all the more powerful by Dire Strait’s classic Brothers in Arms, fantastic camera work, terrific editing and great acting.  Most importantly, however was the script.  I found it to be the most riveting writing I have ever witnessed.

If you watched it before, watch it again.  If you’ve not seen it, make it a point to.  Bravo to everyone involved with that series and most importantly that incomparable episode.