When Hoplite Entertainment pulls it all together and films Third Man based on The Sixth Day, A 17,175 Word Novella About Creation and Prizefighting, I know I will enjoy walking the ‘Red Carpet;’ the film is certain to be a critical and financial success based on the preliminary screenplays I’ve been privy to read.  As big a thrill as that will be, it will not eclipse two things that happened in January 2015 regarding my books.

I will stick to my frequent statements that the greatest satisfaction I get from writing stories is not the paychecks, rather the reviews and comments people share with me.  When a reader truly ‘gets’ what the book is about and expresses it in a review, a comment, a phone call or an email, it justifies the years of work that go into a manuscript.  That said, I will remember two ‘book events’ in January 2015 and cherish them for the rest of my life.

I have already written about the first one, Alistair McKenzie’s presentation two weeks ago of the ‘nativity sequence’ from Gaspar on Epiphany weekend at the Redemptorist Renewal Center.  The second event occurred this morning at Legacy Traditional School in Maricopa, Arizona.

My 7-year old granddaughter, Xylia is a member of Mrs. Ball’s second grade class.  Whenever she visits us in Tucson, Xylia spends time in my office asking questions about my books and about writing books.  In December last year, she asked if I would come to her class and talk about writing books with her class.  “Sure,” I told her.  She obviously said something to her teacher because a week or two later, Mrs. Ball asked if I would be willing to do it.  Today was the day.

I have spoken publicly many times in my life … to hundreds of aviators at symposiums in the United States and in Mexico City, Toluca and Acapulco …. To athletes at schools and conferences…. To book clubs … to private corporations, but I have never enjoyed my time with a group of people as much as I did with these attentive and inquisitive second-graders.  We talked about reading, we talked about writing, we talked about dogs and guardian angels, and we talked about geography and foreign language.  It was a thrill to be carried all over the map by these wide-eyed boys and girls.

When I explained that Xylia calls me ‘Dziadek,’ I asked if anyone – other than Xy – knows what it means.  One little boy in the very back row raised his hand and answered, “Grandfather.”  “How did you know?” I asked in my amazement.  “I guessed,” he admitted.  Pretty good guess!

We ended the discussion remembering Dr. Martin Luther King, Jr. and the children were quick to follow my lead and ‘sign out’ with Reba McEntire’s “Pray for Peace.”  It was a fitting way to end the morning with a group of children who carry the future of our planet in the innocence of their youth.  As I personally pray for peace, I also pray that these youngsters never take their commitment to that dream for granted. 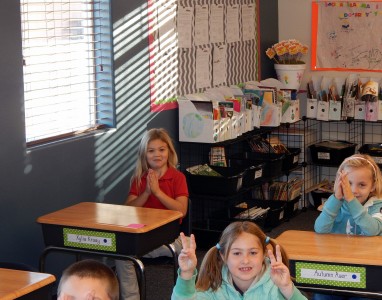 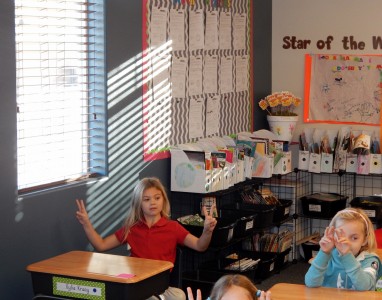 We Are All ONE Family